Skip to content
Home/Plasma reactor, Recent-events, Reseach and Development/At the University of Technology in Vienna – Teamwork Tool to Target
Previous Next

At the University of Technology in Vienna – Teamwork Tool to Target 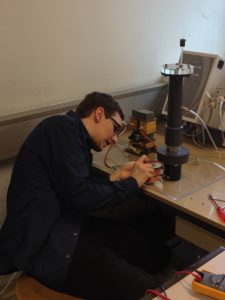 Master Candidate Roman Koller at the University of Technology in Vienna at work with the gliding arc plasma reactor.
Photo: Margarete Drager, SBI

Tuesday April 9th the team around Master Candidate Roman Koller at The University of Technology in Vienna assembled again. The third gathering

of the team since Mr. Koller started his Master thesis work March 1st.  In addition to the University staff Mr. Ferdinand Stempfer and Mrs Margarete Drager of SBI GmbH contributed.

The installation of the gliding arc plasma generator at the Institute of Applied Physics in Vienna was successfully accomplished last week.  The unit was in operation, and the spectroscopy equipment as well as various methods for monitoring the arc were discussed.

It seems also clear that it will be possible to collect sufficient data at higher accuracy than we could realistically hope for.  The institute demonstrated their competence and capability to provide the state of the art equipment for the purpose.

The Master Candidate Roman Koller and his Directing Professor Laimer was also supported by Professor Dr. Herbert Störi (Head of Institut für Angewandte Physik).  The common brainstorming raised several questions, new references and ideas for the M.Sc. student, and a Ph.D. could easily have been defined.

The program however is well defined, and the first results will be coming in this week.  With these results, the verification of the model and the physical effect of the pressure will take a new step towards certainty. The learning curve is steep, and the complexity of a simple gliding arc has suddenly been turned into the vehicle forward. It contains all the different plasma types; the arc, the glow, the stramers?, the none equilibrium and the equilibrium plasmas, the Townsend discharge, etc etc.  Pandora’s box is being opened, and with the state of the art spectroscopy and software to analyze the quantum energy releases, the challenge will be to interpret and select.

The software and modern techniques will initially give information overflow, and the target is to transfer the right information into the young and untainted head of Mr. Roman Koller.  The tool for this is the collective knowledge of the institute and sponsor.  Teamwork Tool to Target could be our slogan. (TTtT)

An expectant project manager we understand. 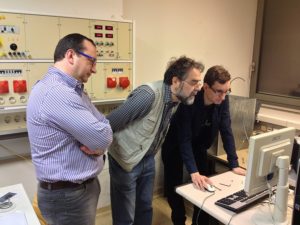